The initial exam may expose problems which require additional follow up at the records appointment. One way to investigate problems is with additional X-rays. If Dr. Renick feels that the situation warrants it, she may prescribe one of many images appropriate to the suspected problem. 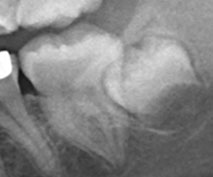 The standard images we use in orthodontics are the panoramic X-ray and the lateral cephalometric X-ray. These images are called “extra-oral” because the sensor is outside of the mouth. The biggest limitation to these two images is the overlapping we see as a result of taking a 3D live situation and flattening it down to 2D. For this reason, these images are good for giving a general overview and looking for certain problems, but are not diagnostic for other situations such as decay, gum disease, or certain pathologies. What they are good for are for raising questions and pointing the doctor in the direction of other diagnostic tools.

Science has come a long way since William Rontgen published the first paper on X-rays in 1875! We have learned to develop protocols for viewing specific areas in the body. Digital X-rays were introduced in 1980 and have significantly reduced the amount of radiation exposure needed to take images. This advancement has opened up whole new avenues for the doctor to order new views and images to make a better diagnosis. Consider what you can see when you use a flashlight in a dark tunnel compared to when you went through the tunnel without it.

The general dentist has the ability to take intraoral films where the sensor is placed in the mouth. The advantage to this is that it reduces the problem of overlapping items for a much clearer and more diagnostic image. Bitewings that you may receive during a regular dental exam are examples of this type of image and, because of the clarity, can be diagnostic for decay that can’t be seen in the panoramic X-ray. 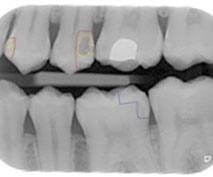 Anomalies can sometimes be seen in the orthodontic panoramic X-ray which would require further investigation. They are not necessarily “bad” things. They can be artifacts such as shadows cast by earrings that can be identified on a better image. Or, they can show the beginning of a problem such as an infection, cyst or other issue that should be addressed. For this reason, Dr. Renick will prescribe additional X-rays to clarify the image on the panoramic X-ray for diagnosis. Some of these additional images can be done in our office and some of them will require a referral to another office such as a dentist or oral surgeon which may have other types of imaging equipment.

One of the most recent advances in dental X-rays has been the cone beam CT or CBCT which is a 3D image of the head. The CBCT was originally developed in 1967 but has only been available in the dental field since the late 1990’s This technology has been revolutionary in diagnosing problems in orthodontics and the rest of the dental field. However, due to the increased amount of radiation, it is still used judiciously, especially when smaller images will suffice. Dr. Renick will prescribe this image when she feels it is the best image to achieve a proper diagnosis, especially in the case of abnormalities.

For more information about dental and orthodontic X-rays and to schedule an appointment with our orthodontist in Sunbury, Ohio, call Renick Orthodontics at 740-936-5003.